Ah Dubai, the world capital of shiny new things. The most bullish cosmopolis in the Middle East, where billionaires look upon millionaires with amusement. Where you’re nobody if you don’t own an absurd menagerie of Sumatran tigers, with a sprinkling of African servals to spice things up. Where local police routinely drive the Lamborghini Aventador, Ferrari FF, and McLaren MP4-12C. And with Dubai winning the bid to host Expo 2020, looks like the battle of the biggest and the best has just begun.

The city projects 20 million annual visitors by 2020, with an upsurge in visitors from North America. Award-winning Emirates, Dubai’s flagship airline and sponsor of global events like the Rogers Cup here in Toronto, now offers non-stop flights between Toronto and Dubai three times a week. Meanwhile, on the West Coast, the inaugural 489-seat A380 out of Los Angeles debuted this past December.

One of the most popular times to visit Dubai is mid-December, during the Dubai International Film Festival (DIFF). This major film festival showcases Hollywood Oscar contenders alongside international art house films, with a particular focus on fostering homegrown Emirati work. The glittering social scene has drawn the likes of A-Listers from George Clooney to Tom Cruise. Moreover, locals say this is when the weather is at its peak perfection.

The global financial crisis may have left most of us in a fiscally conservative mode, but in the UAE, unabashedly appealing to the ultra-high net worth never went out of vogue. With so many posh cars, five-star hotels, and smashing shops, Dubai is a pretty easy place to live large. Here, we take a look at the priciest treats a movie mogul and four ballin’ mates could splurge a collective million on.

Barely a month old, the Four Seasons Jumeirah Beach is Dubai’s latest luxury hotel, boasting a private beach, a pitch-perfect spa, and a bevy of stylish bars and restaurants. With a prime spot on Jumeirah beach, yet still only 15 minutes by car to the Burj Khalifa and the Dubai Mall, the Four Seasons Jumeirah Beach hits the sweet spot for travellers wary of the city’s concrete overkill. Sweeping into the palm-lined drive, eight ancient olive trees evoke a Mediterranean vibe, a curtain raiser to the palate of pleasures inside. Everything about the Four Seasons Jumeirah Beach has been intimately scaled to re-invent the idea of luxury in this city of gleaming glass. The muted pink low-rise buildings lend a sense of place, a grounding antidote to vertical living. No expense has been spared here – even the handrails in the elevators are made of Murano glass. I immediately fell in love with the fragrant gardens and the perfectly-groomed pearl sand beach. At five stories, the resort is low rise amid the city’s soaring towers, in keeping with the surrounding coastal community. The prestigious Jumeirah neighbourhood – often likened to Beverly Hills with its mansions and celebrity hotspots – is mostly residential, with cafés, shops, and galleries within strolling distance. Three sumptuous suites on the Resort’s uppermost fifth floor include two 5,900-square-foot Presidential Suites, each boasting its own media room, private gym, and panoramic sea views from sprawling terraces. The Royal Suite — accessed by its own private elevator —  is a luxurious 6,458 square feet that includes a spa, gym, show kitchen, butler’s pantry, and, at the heart of the space, a grand living salon with its own piano, perfect for entertaining. Covetable Etro amenities are a highlight, as are the courtesy chocolates, cakes, and local sweets delivered every afternoon. Plush toy camels appear on the bed at turndown, need I say more?

Skyview Bar’s ‘Diamonds Are Forever’ cocktail is one of the world’s most expensive orders. Composed of L’Heraud Grand Champagne Cognac, Luxor 24k Gold Flake Champagne, and The Bitter Truth Jerry Thomas bitters, this gilded concoction is flawlessly served in a Swarovski crystalline cocktail glass, complete with diamonds in the stem. And yes, you get to keep the glass as a reminder of “that time in Dubai I drank a week’s salary in seven sips…” Swiss luxury watchmaker IWC Schaffhausen hosts a black tie dinner at the One&Only Royal Mirage during the Dubai International Film Festival. In the glittering climax of the posh event, brand ambassador Emily Blunt presented the 2014 IWC Filmmaker Award of $100,000 USD to Abdullah Boushahri for The Water. From the fashion elite on the red carpet to a live set by Aloe Blacc, this party is the hottest ticket in town. Blunt dazzled in an emerald green Lanvin dress while Aloe Blacc got the chic crowd dancing in their Dior as he broke out into I Need A Dollar and Wake Me Up. Drop by the IWC boutique at the The Dubai Mall to see the space devoted to showcasing the brand’s most complicated timepiece; the $750,000 Portuguese Sidérale Scafusia. This watch took 10 years to produce and features the collaboration of noted timepiece makers like Ben Moore of the University of Zurich and Jean Francois Mojon, the man behind Harry Winston’s Opus X. The Siderale Scafusia is one of the most complicated watches ever produced by IWC, the first to feature a patented constant-force tourbillion together with individually calculated astronomical displays. A few watches to splurge on include: IWC Portuguese Tourbillon Hand-Wound ($61,100); IWC Da Vinci Perpetual Chrono Platinum ($70,000); IWC Portuguese Tourbillon Mystere ($95,000); IWC Portuguese Minute Repeater ($116,000); and IWC Portuguese Mystery Tourbillon Retrograde ($136,000).

Give Back at the Global Gift Gala The honourary chair of the Global Gift Foundation, a non-profit organisation that helps to raise funds to improve the lives of disadvantaged children, women, and families around the world, was clearly thrilled to be back in the glittering city. “I’m very excited to be back,” Longoria said on the red carpet. “This is our second year attending DIFF and we’re very pleased to be partnering this time around. It gives us a bigger platform and allows us to do more things with more charities. Dubai is a wonderfully generous community so it’s great to be here.”

Break through the Sky at the 828-metre Burj Khalifa

Treat five friends to a sky high ride and get ready for your close up. As of this past October, Burj Khalifa reclaimed yet another Guinness World Records title for Dubai for with the addition of “At The Top” observation deck at the 148th floor. This is a new addition to the already operational 124th floor observation deck. Visitors to the world’s tallest building can drink in an even more elevated view of Dubai, riding up 555 metres above street level. Earlier, tourists could only go to a still-operational observation deck on the 124th floor. Nearly 1.9 million visitors did so last year. The higher views come with steeper prices. Pre-booked tickets for the new attraction cost the equivalent of US$109, or $136 for immediate entry. Odyssey in the Desert with Platinum Heritage

High rollers celebrate their winning streak by splurging on the ultimate in luxury safaris with Platinum Heritage, one of Dubai’s leading luxury tour companies. The experience begins with lively staff introductions as we hop aboard a gleaming Mercedes G-Wagon, the off-road vehicle of choice of the rich and infamous. As the only local tour company operating inside the grounds of the Royal family’s private desert retreat, Platinum Heritage operate on a whole new level of luxury. They’re also the only company to offer a safari in a 1950s Land Rover, so if retro gets you revved up, be sure to book one of the Heritage tours.

After spending the first hour driving through the Dubai Desert Conservation Reserve in search of native wildlife, we make our way to a gorgeous tapestry of locally-woven rugs set upon picturesque dunes to watch the sunset in the distance. Think sunset canapes like white truffle-infused custard, blue swimmer crab and caviar, and tea-smoked lamb. We make our way to a falconry show before embarking on camels into the dark of the night, ending our ride at a secluded private set-up amongst the rolling dunes of the Royal desert retreat. Here, we enjoy a range of authentic experiences – such as henna tattoo artistry, ornate shisha pipes, seven course authentic Emirati dinner, and a traditional Emirati dance performance. Dinner options include grilled salmon and king prawns, Australian angus rib eye steak served on an antique Arabic wooden door-turned-table, complete with silk carpets and fluffy cushions to relax by the bonfire.

In a city where over-the-top spas are the standard, The Pearl Spa at Four Seasons Resort Dubai at Jumeirah Beach is a must-experience showstopper. This 7,600-square-foot spa features 10 spacious treatment rooms, deluxe aqua thermal experiences, gorgeous gardens and an indoor swimming pool topped by a glass canopy. Traditional healing rituals combine with the newest technologies, creating the best Dubai spa experience. The real highlight in this haven is the gifted therapists from India, Thailand, and Indonesia. The most lavish treatment is the Dubai Pearl Journey at a rate of $1,770 for 240 minutes. Fly ‘n flop doesn’t get more sublime than this. Seawings delivers a once-in-a-lifetime luxury aerial experiences that thrill to the core. Gently lift off from the calm waters of Dubai and effortlessly ascend to the skies. Monumental views, spacious cabin, luxury leather seats, and five-star service are yours for the day. Your party of five will journey into Dubai’s historic past, its present-day modern metropolis, and the planned developments of the future. The 11th edition of DIFF did not disappoint on the style front. Upping the sartorial ante, the Harvey Nichols party brought the town’s boldface names out in their festival finest. Channeling all things cinema and glamour, the party featured cherry blossom installations and angels on vine-covered swings. Harvey Nichols’ fashion and jewellery division presents some of the world’s most exclusive brands, including Bvlgari, Bottega Veneta, Giorgio Armani, Gucci, Loro Piana, Sergio Rossi, and Saint Laurent. By day, shop the high street looks; take in the nightlife after dark. Harvey Nichols shopping spree at Mall of the Emirates = $100,000

Ever the austerity-free zone, the UAE is now home to the world’s most expensive cupcake. Topped with gold flakes, Dubai’s latest status dessert costs $27,000. Bloomsbury’s, a boutique cafe in Dubai, makes the cupcake specially to order; it takes up to two days to prepare and contains some of the world’s most expensive ingredients. The Golden Phoenix is made using 23-carat edible gold sheets, apparently so smooth and thin, the creation melts in a mere 15 minutes. After Ashraf Hamouda of the World Food Programme pointed out that the income from a single cupcake could feed at least 1,850 children, Bloomsbury’s now says they will donate 50 per cent of the profit from it to the World Food Programme. 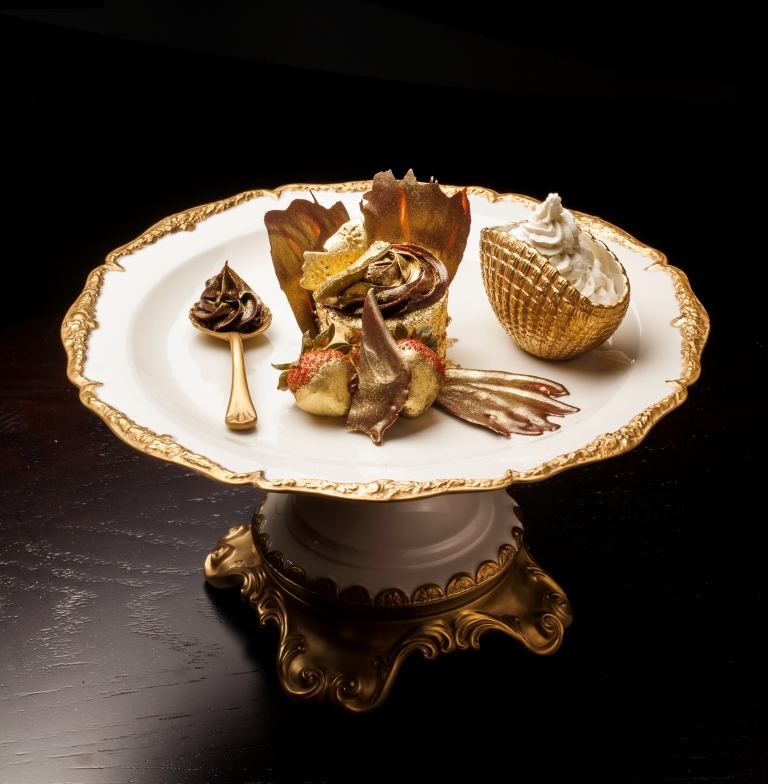 How would you spend a million dollars in a week in Dubai? Let Vv Magazine know in the comments below or tweet us @ViewTheVibe.