“The best ingredients” – Chef Rob Gentile uses the phrase repeatedly in our conversation, stressing their importance. The repetition is not redundant, there is no lack of meaning. The ingredients constitute his dharma; they are a representation of his childhood, his family, his education, his mentorship, his pride, his work, his restaurants, and his life.

Like his two previous award-winning restaurants – Buca King Street (described as “Nonna” – the tank, the originator) and Bar Buca (the “spunky nephew”) – Chef Gentile has an ingredient-focused approach to Buca Yorkville (formally titled Buca Osteria & Enoteca), whose maritime twist forms the basis for his somewhat simple — yet sophisticated — new endeavor. 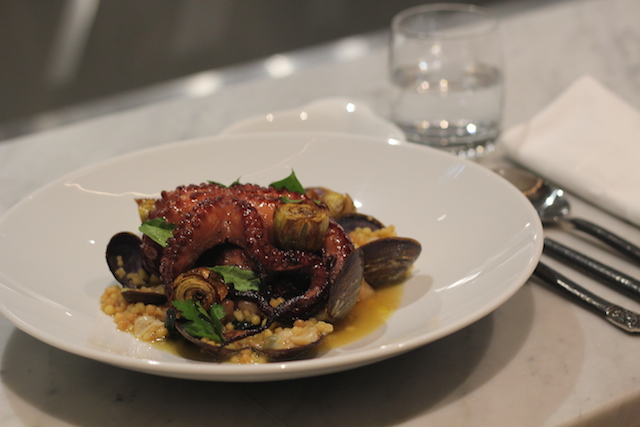 “It just so happens that most of the major cities are inland – the most popular thing happening in Italian food is meat. So when we experienced fish in Italy, it was just like a whole ‘nother level, even for me because we don’t live near an ocean in Toronto, so my family was cooking meat. It was a great feeling. It was super exiting.”

“So it was like, what if we just flipped the concept of King Street? We do the exact same thing, it’s all our food – it’s the same thing in Italy. Here, we use the tuna blood, we’ll cure the heart from the tuna, we’ll do something with the skin from a swordfish, we’ll cook with codfish tongue — and at the same time, we do simple pomodoro dishes; we do simple salads.” “It’s a mixture of the idea of the ingredients and the idea of, ‘We’ve received the ingredient in its entirety, how do we use all of it?’ Nothing goes to waste ever in Italy… ever! Doesn’t matter what it is.”

There is a strong focus on locality and regionality. The fisheries, waterways, and location of the catch, as well as accompanying ingredients, are given prime real estate on Buca Yorkville’s menu.

“We’re very close with the suppliers that are sending us the fish,” he explains. “I receive photos of the fishermen, I receive photos of the boats. Whether it’s Outlandish Fisherman’s Guild in B.C. or Fisherfolk in Nova Scotia; whether it’s Alex at Société in Quebec, or if it’s Dan at Hooked with his connections; and directly to the people who are either farming or fishing.”

“We get really detailed updates and we translate that all to our employees. We show them pictures, we present them with all the different kinds of fish before service. That’s what keeps us confident in what were doing, because we have good reliable people we’re working with.”

Beyond the education Chef Gentile imparts to his staff, a learning experience is something he strives for with Buca Yorkville’s patrons.

“When I was at Slow Fish in Genoa, the most important message was that, ‘We have the ability to make people listen.'”

“There’s a lot of interesting stuff we’re able to work with that doesn’t come into the Canadian market. It’s available to us because we’re chefs and it’s not to the general public, which is sad.”

“The more that people come into the restaurant and say, ‘I had this arctic char or I had this amazing type of clam,’ or the more that people are aware how much useable product is on a whole tuna or swordfish or even halibut; instead of going for the same salmon that you always see at the grocery store, more people will ask for different species. That’s the only way the market can change.” As Buca Yorkville ramps up and a fourth project looms – Jamie’s Italian, a collaboration between celebrity chef Jamie Oliver and Gentile’s King Street Food Company, set to drop this spring at Yorkdale – I ask if he fears burning out.

With attitude, ambition, talent and reverence, add Chef Rob Gentile to the list of household names within Canada’s culinary landscape. And if he’s truly made his mark, his appreciation and edification of our local producers and products will transcend the niche and follow in his path.

Are you excited for Buca Yorkville? Let us know in the comments below or tweet us @ViewTheVibe. VAN: What You Need To Know About Whistler Cornucopia Food And Wine Festival

Fun Times at the Gentlemen’s Expo 2014