Unnecessary work is a thing of the past, and anything convenient yet tasty is widely accepted —  which explains why these ready-to-drink cocktails have been flying off the shelves this summer.

So with an open mind, having rejected the concept in the past, I headed out to the LCBO to give them a fair chance. Overwhelmed by options, flavours, cocktail varieties and even sizes, these were my top 8 that stood out: Surprisingly, being an avid Moscow Mule drinker, the Moscow Mule is quite good. I wouldn’t quite go as far as saying it tastes just as good as a fresh one, but close enough. The one thing I will have to add is that making sure that these drinks are properly chilled prior is so important. Maybe even pouring it into a glass of ice will also help keep it that way — maybe even a copper mug, and lime slices if you wanted to add a little effort to it. Cabana Coast also offers a Vodka based option with a citrusy grapefruit flavour, and also a Cucumber Gin & Tonic option, although my favourite was the Moscow Mule. All three of which have an ABV of 7%. This one was probably one of the most interesting options. If you’re a passionate Jack Daniels, Coke or Pepsi cola drinker, this isn’t for you. But if you enjoy Jack Daniel’s based cocktails, then you might just have found a new love. It’s a great spin off of a traditional Jack & Cola, medium sweetness, and more of a Pepsi like cola flavour. That said, I would probably go for more of a classic Jack & Cola if I had the option — so that I could use Coca Cola, but still quite refreshing, and has a ABV of 5%. Just like it sounds, this is definitely one of the options I’d love to crush mid-afternoon sitting lakeside at the cottage. It smells just as delicious as it tastes. Probably one of my top three gin based options on the market, and just had a great refreshing overall taste to it. If you’re into gin and tonics, the general consensus I got from friends, was that this was a great alternative. Dry, but with a subtle sweetness — and with a ABV of 4%. I know I know. When you hear Bud Light you immediately think a tall foam topped cold beer. But their grapefruit radler is a delicious new alternative. I had been recently exposed to it while checking out the Toronto Festival of Beer last weekend, and being a non beer drinker, I flocked to all the alternatives, and this one along with the new lemonade they were sampling were refreshing AF! I mean, it went down like water, and I mean with only a 2.4% ABV, you could end a few extra without worrying about tipping over. What I liked most about this one is that unlike many of the others, this one has no added sugars, sweeteners or preservatives. So with that in mind, if you’re looking for a super sweet, flavourful cocktails — this isn’t it, but if you’re a vodka soda drinker, we have a winner! I don’t typically fancy a Vodka Soda, but I taste tested with a few of my friends who are, and they swore by it. I mean, how can you go wrong, it’s exactly what you’re looking for. Great vodka, mixed with sugar and sodium free carbonated water, and comes in three subtle flavours: lemon, lime, and grapefruit. All three of which have a ABV of 5%. Mad Jack also have a Ginger lager that is also typically sold with the cider and hard root beer, but I didn’t think it was a good fit for this roundup. I decided to include their brand new hard iced tea instead. Don’t get it twisted, the Mad Jack Hard Ice Tea isn’t like some of the others on the market. It’s surprisingly refreshing and boasts all natural sweetness too. The apple cider is as good too. Wouldn’t say it’s my number one cider on the market, but definitely one of my top 3. It’s light, refreshing, not overly sweet, and doesn’t have a bad aftertaste like some of the others. These all have a ABV of 5% too — so be careful, they go down like water. 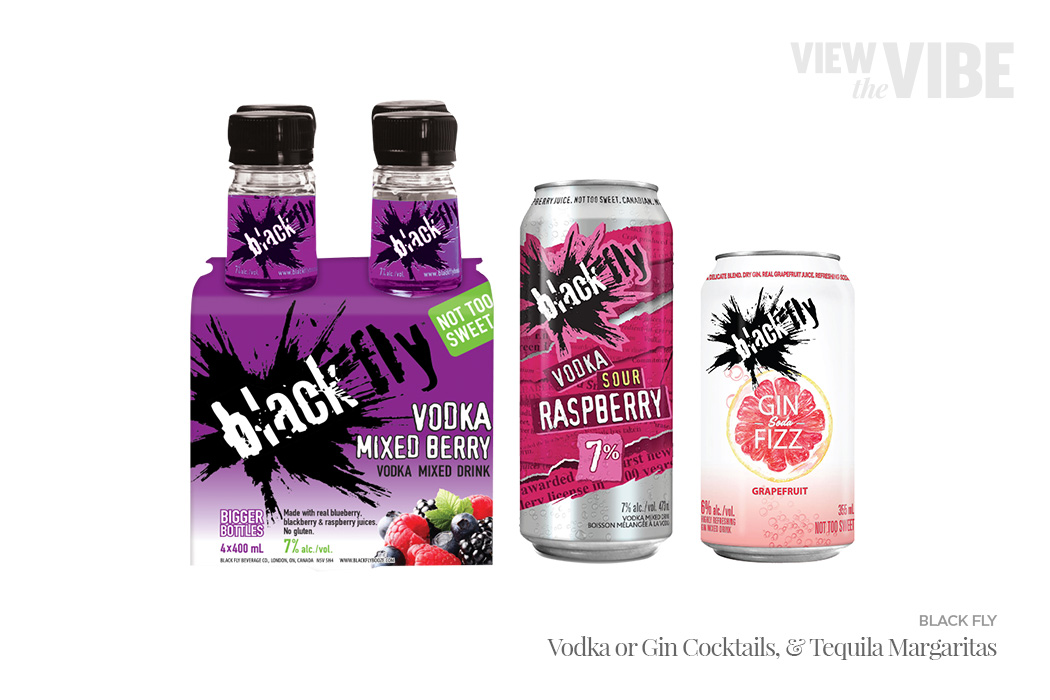 Black Fly is probably one of the brands with the most options available — and some of the best for that matter. They have different flavours, sizes, and even bottles, cans and tall cans too. They have the common Vodka and Gin Soda, both in a “Fiz” option, and without, and in a variety of flavours. But some of my favourite are the ones in the bottles, particularly the Tequila Margarita and Vodka Mixed Berry flavours. And I trick I quickly figured out was since the bottles are plastic and not glass, you can place them in the freezer, and then take them out just before drinking and squeeze the bottle to pour it out and drink like a slush based drink. What more could you ask for right? But also, as a Vodka Cranberry crusher, I was surprised to really love their bottled Vodka Cranberry too. But I mean if I didn’t stress already, here’s a bunch of their options I found, and they have a ABV between 6-7%: The Georgian Bay Gin Smash is less sweet than most ready-to-drink beverages, and hands down the best on the market in Toronto. What’s even better is that it’s made with natural ingredients. No wonder it keeps flying off the shelves faster than the LCBO can stock it — and if you have gone looking for it in the past you’ll know what I mean. Thankfully, they’ve caught on and it’s a lot easier to find any of these available at LCBOs across the city. To my knowledge, Georgian Bay are the only ones to produce a smash in a can, and they’re, may I say, delicious AF! But that’s not all the Vodka Smash, and their new Cranberry Gin Smash are really good too — just hard to beat the original. All three of the options have a ABV of 5%

They’re all great options in their own ways. Believe me, there are MANY more where that came from. The Ready-to-Drink beverage space continues to expand and consumers are all over it.

“Today’s RTD consumers are savvy. But it’s about more than convenience. We want quality. When it comes to entertaining, having a variety of bar-quality, spirit-mixed drinks provides an instant bar that people can be confident their guests will enjoy. Best of all, without having to stock all the ingredients and take time to mix cocktails, serving quality RTDs let’s you spend your party enjoying the party.”

And she’s totally right! I mean, time is the one thing we can never get back, so if we could save time, and not have to give up quality, then we’re winning!

Unsurprisingly, Georgian Bay Spirits was awarded top marks in a blind taste test at the 2016 World Spirits Competition in San Francisco. See it isn’t just me that thinks it tastes great — try it, you can thank me later. Just don’t drink and drive — enjoy the rest of the summer!

The fearless leader of SWAGGER Magazine and ViewtheVIBE.com. A serial entrepreneur, polyglot, published international photographer, and self-professed Creative Genius. Always following the latest trends in men's fashion, tech, and cars. If you don't find him glued to his phone, he may be sun bathing on the hots sands of a sun destination.