There are certain aspects of fall fashion that I love. Black leather everything, oversized wool coats, and statement scarves are all fabulous. But assuming that all these layers mean you can stop shaving south of the collarbone, however, is one trend I think we can all do without. While militant feminists and the French may disagree, I personally believe that proper grooming is not a seasonal matter.

That said, shaving is über-annoying on the best of days so here is something that can help you do it less. Having just become available in Canada this past August, Inhibitif has swept the hair removal scene by storm (… yes, there is a hair removal scene). 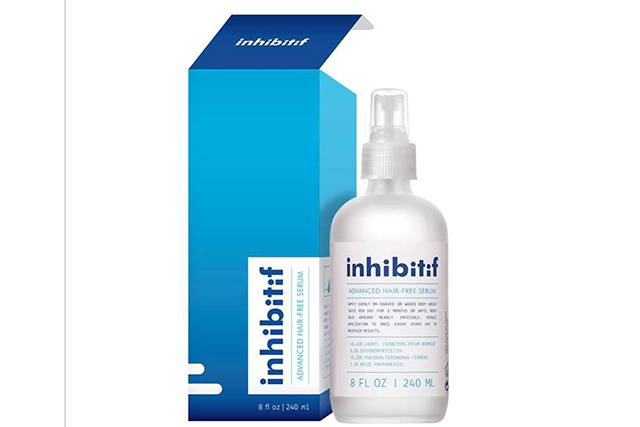 Inhibitif is a highly-concentrated serum that uses three proven-action technologies at their highest-ever concentrations. This combination blocks the stimuli that makes your hair follicles grow, resulting in the blockage of hair growth, or at least, growth to a lesser degree. The stuff that does grow back is supposed to be less dense and finer, thus removing the need for frequent hair removal and in-grown hairs. Results should be visible within eight weeks and apparently it’s the cheapest one-year cost of lasting hair removal. Sound too good to be true? That’s what I thought too.

So, in the name of journalism, curiosity, and narcissistic epilation, I decided to take one for the team and try the Inhibitif 8-Week Challenge on my chest. Basically, you spray Inhibitif on your chosen area twice a day for the eight-week period and you should see results by the end. After that, you can go down to spraying once every other day. As somebody of half-Asian, half-Irish extraction, my body is pretty much the battleground for a war waged between two vastly different genetic codes. While my chest naturally lacks the burly shag carpet associated with a good Irishman, I’m not exactly a Chinese crested either. However, because I’m practically a legal midget and quite thin, I think the hyper-manly look doesn’t really work for me. To summarize my experience, I’ve broken it down into The Good, The Bad, and The No Longer Ugly:

The No Longer Ugly