Think you have a cool job? Think again. Yes, it’s my Job explores all the different occupations – from the unbelievable to the unique – that you’ve dreamt of but never knew existed.

For as long as I can remember, I have known Katherine Curtis. She’s smart, sassy, independent and well, she’s a gigantic comic book nerd and an avid cosplayer. I loved hanging around with her. But the funny thing is that Curtis has amassed a bit of an online following for this little show she’s worked on for the last eight years – which you may or may not have heard of it. As one of the lead anchors and producers on Naked News, the show that bills itself as “the only fully nude real news program of its kind in the world” – Curtis, alongside a crew of other anchors, undress themselves while telling all the latest and greatest news stories. If that sounds too good to be true, well it really isn’t. Curtis tells me, “I spend my days writing about Star Wars or interviewing people while naked then delivering political news in my skivvies.”  If that doesn’t make you a bit jealous, then I don’t know what will. Naked News is a subscription website based out of Toronto, which has gained a huge following around the world. Curtis herself has just over 19k followers on her personal Twitter account and 25k followers on her personal Instagram account. As one of the lead anchors and producers on Naked News, Curtis spends much of her days getting content together for their daily 25-minute episode explaining to me, “People seem to equate the nudity (on our show) with sexuality and think what I do is porn. Porn’s great, but it’s not what I do. Our show is more fun than sexually stimulating.” The news channel offers everything from news, sports, business, entertainment, and interviews – where they have offered some guests to get naked with them including Curtis’ personal interview favourites Kevin Smith and Hugo award-winning author Robert J. Sawyer, but in her time with the station she has also interviewed Gail Simone, John De Lancie, and Scott Thompson. While she gets and understands that most of the viewers of her channel are men, it doesn’t dissuade her at all. She is fairly open about being a feminist via all of her social channels, worked through her entire pregnancy documenting how gorgeous a pregnant body could be and knows that when she’s writing her segments, she is crafting them for a particular audience. In a Reddit AMA she did she explains, “I like being naked. I wouldn’t say I’m an exhibitionist, because I don’t get any sort of thrill from people staring at me, but I’ve always been relatively comfortable with my body and it makes me happy to work in a field where we’re actively trying to break the stigma against nudity as something to be fetishized.”

For Curtis, she always wanted to get into journalism but growing up in a small town, she never decided to pursue journalism school. When she heard about Naked News, she auditioned and got a job as an anchor with her explaining, “a few months later, I submitted a sample script for a segment about fan culture I’d written and the producer liked it enough to run a test segment. Now I’m writing and producing segments for the show as well as anchoring, and I love it.” In her years with the station, she’s traveled the world with a recent trip to Croatia and says she loves everything about her job except the excessive dick pics which she bemoans, “at least once or twice a day, I’ll get a dick pic or someone demanding free nudes.” 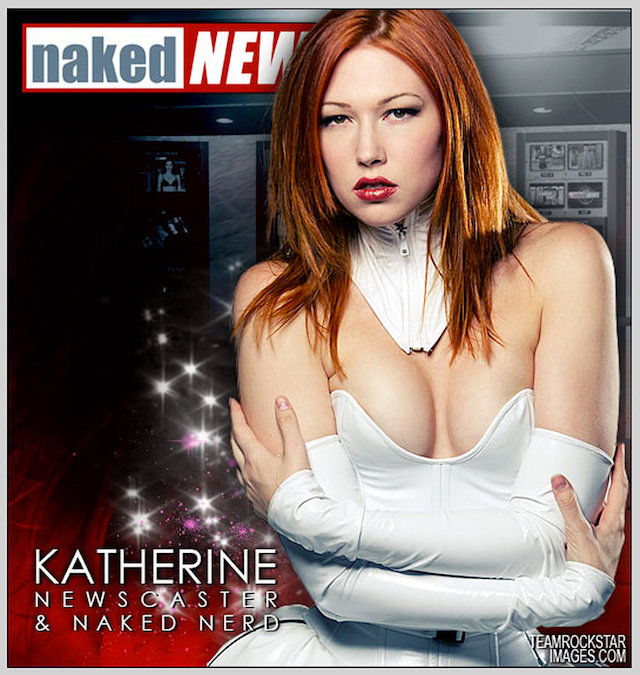 So you think this job sounds fun? Well, you should try it or at least Kat thinks so. She thinks in five years she’ll still be at Naked News and thinks others should come join her explaining, “Be fearless, be passionate, be informed and articulate, and then write to v_lucas@nakednews.com and come audition.”  Hey, you never know – you could end up the very next Katherine Curtis!

Do you think Katherine Curtis has one of the best jobs ever? Let Vv Magazine know in the comments below or tweet us at @ViewtheVibe.